My kids are obsessed with Harry Potter. We have read the books several times. Watched the movies, more times than I can count. And of course, we have annual passes to Universal Studios where we can visit the Wizarding World of Harry Potter as often as we like. However, I know there are a few more places to visit in this lifetime for these kids of mine who love Harry Potter. Here’s a roundup of 13 magical adventures to have for kids who love Harry Potter.

This article may contain affiliate links, at no additional cost to you, help support this website.

As mentioned, this is one of the obvious stops for those of us in the United States. The Wizarding World of Harry Potter exists in both Universal Studios Orlando and California. Whether you want to explore Diagon Alley or satisfy your sweet tooth in Honeydukes in Hogsmeade, you will fall in love with the surroundings. Rest assured, every detail in these locations is J.K. Rowling approved.

Related: Everything You need to know about Interactive Wands at Wizarding World of Harry Potter

Related: Is Universal’s Express Pass worth the Cost

If you’re looking for the most authentic Harry Potter adventure, London, and its surrounding areas is a must visit.

Leadenhall Market was the inspiration for shops in Diagon Alley. It’s also the home of the entrance to the Leaky Cauldron as seen in the Goblet of Fire.

If you’re taking the train in London, be sure to stop at King’s Cross Station. The London location honored its popularity in the books by placing a photo op at Platform 9 3/4. Since we’re talking trains, a visit to Goathland Station served as the backdrop for Hogsmeade, and the final stop to Hogwarts.

The Warner Brothers Studio Tour is everything you’ve ever imagined and more. Visit set pieces, costumes, and props all created by the incredible Harry Potter filmmakers. Click here for a full day tour that includes many London sites and admission to the Studio Tour.

The Georgian House Hotel offers Wizard Chambers for your visit to London. These stunningly themed rooms will make you feel as if you’ve been sorted directly into the Gryffindor tower. An added bonus in my book, The Georgian Hous is a family run B&B. You’ll get a truly authentic experience here.

Check out the Georgian House Prices and availability here. 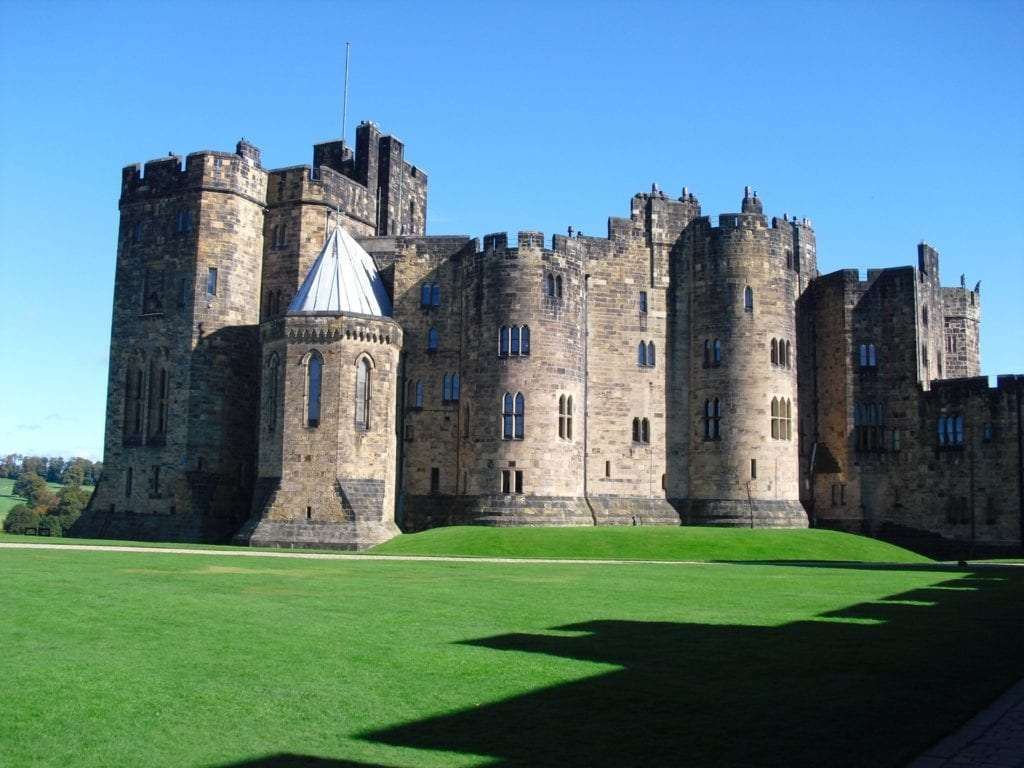 You may remember the scene where Draco stole Neville’s Rememberall – if you don’t, perhaps you need a Rememberall! Alnwick Castle served as Hogwarts during the first two films. Alnwick Castle offers tours and visits that will entice all ages.

If you have a budding author who worships JK Rowling, take her to The Elephant House in Edinburgh, where Ms. Rowling spent countless hours writing her masterpiece.

Getting to Scotland, however, must be done on board The Jacobite train, which runs across the “bridge to Hogwarts.” The special Hogwarts route will take you across the beautiful countryside featured in many of the films.

Between London and Scotland, I only included items I considered adventures. For a full list of filming locations, click here.

Need more? Check out these guides.

The UK and Universal worlds aren’t the only places to get y our Harry Potter Adventure fix. Check out a few more escapades you can take your Potterheads.

That’s right, you can visit a real Quidditch pitch and root for your favorite team. The US Quidditch is a collection of teams from around the country.  The US Cup is played every April, with this year’s US Quidditch Cup 11 taking place in Round Rock, Texas. This is a full-fledged sporting event full of action that your Harry Potter fans are sure to enjoy!

It’s only fitting that the home to legendary stories of witches would be home to a wand shop. Wynott’s Wands, while clearly using many elements of the story, are not affiliated with JK Rowling or Warner Brothers. But they do have unique merchandise for sale and would make a great stop on your Salem visit.

Harry Potter the Exhibition is a touring exhibition, similar to what you’d find in the official Warner Brothers Studio Tour. Currently, in Madrid, the Exhibition has traveled to major cities throughout the world.

There’s probably a lot more adventures I’m missing. Do you have a Harry Potter Adventure to add to this list? Comment below to be included!

Save it for later!

Tonya Denmark is a busy mom of two children. She loves planning travel, road trips, 80's movies, 90s alternative, and coffee. She's been detail obsessed for as long as she can remember and brings her best finds and travel advice to the Detail Oriented Traveler.

Hi, I’m Tonya, the navigator of this detail obsessed blog. Who I really am is a map crazed, detail oriented obsessive planner that likes to learn the tiny tidbits of the places I’m heading to. I’m the planner, the organizer, the type A if you will. If you’re willing to drive, I’ll discover the hidden gems along the way.

Get Help Blocking Your Schedule